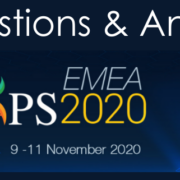 Questions submitted during EMEA 2020 sessions, answered by our speakers and panelists. 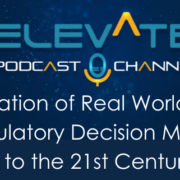 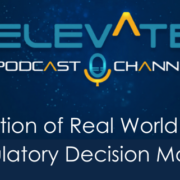 Cerise James, MD, moderates this podcast in which Neil Belson, JD, discusses Real World Evidence and its impact to the biopharmaceutical industry. 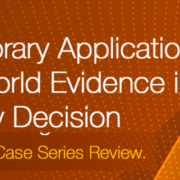 The 21st Century Cures Act, enacted in 2016, requires the U.S. Food and Drug Administration (FDA) to assess the use of Real-World Evidence (RWE) for applications that include new drug indications and satisfying post-approval drug study requirements. RWE can contribute to showing that a drug or medical device is safe and effective, within the context of the FDA’s “totality of evidence approach” for evaluating regulatory submissions. The FDA has approved both drugs and medical devices based on regulatory submissions which have included RWE.

The 21st Century Cures Act (2016) requires the U.S. Food and Drug Administration (FDA) to assess the use of Real-World Evidence (RWE) for applications that include new drug indications and satisfying post-approval1,2. The FDA issued a final guidance document for medical devices in 2017, in which the Agency stated that the applicant could use Real-World Data (RWD) to support regulatory determinations under the right conditions3. While the FDA has not yet followed up with a guidance for pharmaceutical products, their 2018 Framework for FDA’s Real-World Evidence Program outlined the potential applications of RWE for regulatory decision-making regarding the effectiveness of marketed products4. In the instance of an original approval for a product, the FDA recommended that an evidence package could contain three types of studies: clinical pharmacology, non-clinical toxicology, and clinical studies. However, for post-marketing labeling changes (i.e., use in a new population or a new indication), the evidence package could include prior submitted evidence and new evidence, traditionally represented by randomized clinical studies but also RWE studies. What is important for Medical Affairs and Regulatory teams to understand is that regardless of study type, setting, or design, the FDA does not have to evaluate one study type (i.e., Randomized Clinical Trial (RCT)) only when making regulatory decisions. Instead, the FDA uses a totality of evidence approach, examining all available evidence in the regulatory materials submitted including the quality of the studies and context of the manufacturer’s request4.

“While Real-World Evidence analysis will not replace the randomized controlled trial, it already has been used as effective support data for drug and device labeling changes and for rare disease submissions.”

Several applications for labeling expansions and other regulatory approvals have successfully incorporated RWD and RWE. The purpose of this Elevate article is to provide regulatory examples of how various companies have negotiated with the FDA and successfully utilized RWE within regulatory submissions.

Regulatory submissions that involve the submission of RWD can come from data sources that routinely collect health-related information such as claims data, electronic health records, patient reported outcomes (questionnaires and devices), registries, as well as public and private databases. The use of RWE implies the analyses of RWD through applied research methods, such as for historical controls, or other types of analyses using records that were initially collected from sources other than randomized clinical trials. It is important to first target an opportunity where the use of RWE will add to the “totality of evidence.” The role of RWD and RWE has been especially useful for rare diseases as well as for the expansion of labeling to a more broad or newly defined sub-population, and the evolution of procedural medical device techniques. Using a “totality of evidence” approach, one can determine if the new evidence from RWD sources or RWE analyses can add to the existing evidence to create a new evidence package that has value from a clinical and regulatory perspective.

A White Paper prepared in December 2019 by the Duke Margolis Center for Health Policy5 examined non-traditional study designs which have used RWE, including open-label, single-arm studies, retrospective observational and case series, retrospective cohort studies using RWD sources, non-inferiority studies, RWE-generated historical controls, the use of concurrent control groups, and the use of post-market surveillance and registry data. Table 1 is an adapted summary of examples of approvals and labeling changes for drugs using evidence generated from these non-traditional studies. This article discusses three pharmaceutical case examples in this communication: Ibrance for male breast cancer, Invega Sustenna for schizoaffective disorder and Brineura for treatment of a form of Batten disease. The article also examines the label expansion of a medical device based on RWE to include a minimally-invasive approach to aortic valve replacement using Transcatheter Aortic Valve Replacement (TAVR).

Ibrance (Palbociclib) was approved for metastatic breast cancer in 2019. The approval was based on two large randomized controlled trials (the PALOMA studies) in women and supported by clinical pharmacology and non-clinical toxicology studies. Evidence for clinical benefit in male breast cancer was noted from post-marketing reports, insurance claims data and electronic health records. Male breast cancer is a rare condition with a high unmet need for treatment; there were approximately 2,500 new cases and 500 deaths in 2019. The FDA submission included evidence derived from RWD sources including: the IQVIA insurance database, Flatiron Health breast cancer database, and the Pfizer global safety database. The FDA noted in its approval letter that “Given the extensive established efficacy and safety of the use of Palbociclib in women observed in randomized controlled trials, the additional RWE data provided in this application for the use in men, modest as it is, does support the expansion of the Palbociclib indication to provide for the treatment of men with metastatic breast cancer.”6

In 2011, the FDA approved the Sapien 3 device for TAVR, a novel approach that provided a minimally invasive alternative to open heart surgery for clinically appropriate patients. Post-marketing surveillance requirements included the collection of data in over 100,000 procedures in the Transcatheter Valve Therapy Registry, which included a subset in 600 patients that underwent the valve-in-valve variant of the procedure. Although this procedural variant was considered off-label, the valve-in-valve procedure was shown to be an improvement as it allowed the new valve to be placed inside the diseased valve. The FDA evaluated the clinical and functional data for this procedure from the registry to expand the indication for the TAVR-enabling device. The FDA announced that even though the United States had been only the 42nd country to approve the original TAVR device, through the use of creative regulatory procedures the United States became the first country to approve the new indication.

Invega Sustenna (paliperidone palmitate) is a centrally active anti-psychotic and the only once-monthly long-acting injectable (LAI) for schizoaffective disorder. There have been several expansions to the label since its original approval in 2006 for acute schizophrenia. In 2018, a labeling change was approved related to the time to treatment failure compared to oral anti-psychotics using an unconventional clinical trial design that was more representative of the disease population. Prior RCTs had excluded adult subjects with recent incarceration or substance abuse from the trial. The PRIDE trial, which was a randomized open-label pragmatic trial, recruited many subjects from jail-release programs, homeless shelters and soup kitchens. The trial was able to build on the existing evidence provided by published RCTs and include a broader and more representative population using an unconventional RWE clinical trial design that not only showed a time to treatment failure benefit but also a medication adherence benefit compared to oral anti-psychotics.

Brineura (Biomarin) as a treatment for Batten Disease

The FDA’s approval of Brineura (cerliponase alfa) in 2017 as a treatment for a form of Batten disease, is an example of the agency comparing a “single-arm” clinical study of a prospective drug treatment against a natural history “control” obtained from RWD. This use of natural history “controls” in single-arm clinical studies of prospective treatments for rare diseases has historically been among the most common uses of RWD to support regulatory approvals7. Brineura, an enzyme replacement therapy, was the first FDA-approved treatment for slowing the progressive loss of walking ability in patients with late infantile neuronal ceroid lipofuscinosis type 2 (CLN2). CLN2 disease is a rare inherited disorder which occurs in approximately two to four of every 100,000 U.S. live births. Signs and symptoms in the late infantile form of this disease typically begin between ages two and four. Individuals with this condition often require use of a wheelchair by late childhood and typically do not survive past their teens. The clinical trial which established Brineura’s efficacy was a non-randomized, single-arm dose escalation clinical study in 22 symptomatic pediatric patients. The “control” or comparator was a group of 42 untreated CLN2 patients from a natural history cohort (an independent historical control group). Patients treated with Brineura suffered fewer declines in walking ability compared to the untreated patients in the natural history cohort.8

The 21st Century Cures Act directed FDA to evaluate the use of Real-World Data (RWD) and Real-World Evidence (RWE) in regulatory submissions. The objective of this Elevate article is to examine some of the approaches accepted by the FDA for using RWE to obtain regulatory approvals for drugs and devices. It is important to select new indication and expansion targets where there is an opportunity for RWE analysis to credibly add to the existing evidence base using a “totality of evidence” approach.

“While our understanding of the potential applications of RWE and the appropriate standards for its use is still evolving, RWE will almost certainly have an increasingly important role in future regulatory submissions for drugs and medical devices.” 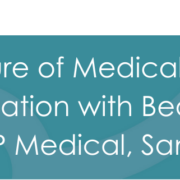 MAPS speaks with Beat Sümegi, SVP Medical with Sanofi, about major areas of change and the need to help Medical Affairs professionals build new skills to succeed in this world of increased responsibility and opportunity. 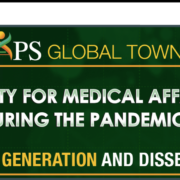 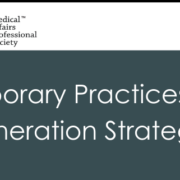 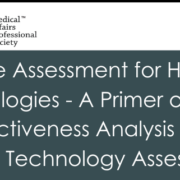 Health technology and value assessment can be conducted using a variety of methods. Dr. Malone will provide an overview of those methods and an introduction on how to interpret the results from cost-effectiveness studies. This webinar will also discuss issues with defining value for health technologies, especially pharmaceuticals. 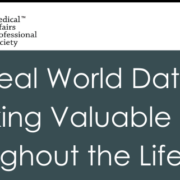 Real world data (RWD), when captured and analyzed, produces the Real-World Evidence (RWE) that underpins the economic case for innovative medicines. This Webinar aims to provide practical insight into the challenges surrounding RWD and RWE generation with interactive conversation on how individual companies are approaching these challenges. 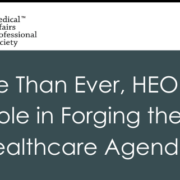 Examine the current state & future of HEOR data in healthcare decision-making; discuss strategies to build strong relationships with payers, the medical community, and patient advocacy groups; determine the impact and value of evidence-based pricing and payment