Eileen Sawyer didn’t always intend to work in pharma—in fact, she hadn’t ever planned to have a career in science.

Growing up in a Boston suburb, neither of her parents worked in the sciences. Her dad was a computer programmer and her mom edited college textbooks. But the family was always passionate about the natural world. Sawyer recalls spending family vacations at national parks, identifying plants and animals together. She’s a self-proclaimed science nerd. She loves the details and especially translating those details to application. Quality science is where it all begins.

In high school, she says she was a ‘big reader,’ and planned to become a writer. In college, that idea changed when she developed an interest in psychology. She loved learning how people think, and she especially liked studying the connection between psychology and biology. 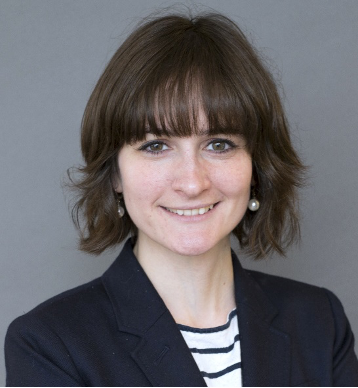 As part of her studies, Sawyer took an introduction to a neuroscience class—and fell in love with it. She enjoyed combining hard science with an understanding of psychology to discover why people are the way they are. It had a storytelling flavor that appealed to the writer in her.

She started working towards her Bachelor of Arts in Neuroscience, and spent her summers interning in labs that studied animal behaviour. Her new career goal became discovering connections between the brain and behavior that could improve healthcare, and after college, she pursued a PhD in Neuroscience research. She hoped to make scientific advancements that would contribute to development of new drugs to help people.

However, after her PhD, Sawyer began questioning if academia was the right fit. She continued on to her post-doc but felt frustrated. Their team was doing pre-clinical drug discovery, but there were stacks of studies sitting in file drawers waiting to be published. It was great science, but she longed to work more directly on creating new medicines. After all, she had gotten into science to help people. She realized that more than anything, she wanted to work closer to patients—and have a greater impact on their care.

That’s when she made the leap into pharma. Initially, she started by doing some freelance science writing and editing on the side. But the more she got to know the world of pharma, the more she realized that the best place to have the type of impact she wanted was in one of those companies itself, directly working on bringing new drugs to patients. To open up new opportunities, she tried old fashioned networking—asking people about what they do and reaching out to leaders in the industry. She got involved with associations in medical writing and communications and applied to dozens of jobs.

Months later, she got a call about an editing job. But by that point, she realized she didn’t want to just write—she wanted to work inside pharma. She declined the role and continued networking and applying.

Eventually, she got the call she was looking for—an interview at Alexion in scientific communications. The team that was hiring was preparing to launch a product for bone disease. The condition was rare, and severe. Babies were born with no mineralization in their bones and died because their chest couldn’t support breathing. Of course, the work was completely different from neuro, as it was all below the neck. Still, Sawyer knew immediately that she wanted to help.

The position at Alexion was a formative experience. Sawyer had a mentor she admired, and a role that allowed for plenty of exposure to all of medical affairs, from launch preparation to strategy. Their team worked in that crucial space between the science and the impacts on actual people. In real time, she got to witness science turning into effective medicine—medicine that made tangible impacts on patients.

She loved every minute of it.

After the drug was launched, Sawyer began looking for her next step, knowing that she wanted to find another role with the same level of impact. She found the perfect answer—working on gene therapy at uniQure.

When Sawyer started at uniQure as Director of Scientific Communications, it was small company with no Medical Affairs department. Six months into her tenure, she became the firm’s first Director of MA, and for the first two years in the role, she was a one-woman department. More recently, she has been able to build out the team and increase their impact.

Now, she leads more than seven people with different MA specialties ranging from communications and field medicine to health economics and strategy.

Sawyer’s MA team is focused on removing barriers to access to gene therapy. The barriers for patients fall into two main categories:

The health care provider or the patient either does not understand gene therapy or has misperceptions about it and how it can treat the condition. They may not even know a drug is in development. The answer to this challenge? Education.

Justifiably, patients and doctors have questions about the treatment. The MA team needs to work to understand those questions, bring them back inside to find answers, and then take those solutions back to the patients. Sometimes, this process requires supplemental studies or health outcomes research.

As it turned out, listening to patients changed the team’s entire development program. From the conversations, they learned that the community wanted something completely different from the gene therapy than was expected. So, they went back to the drawing board, totally changing the design of the program.

Sawyer was responsible for presenting the change to thought leaders, MDs and top patient advocates. When she revealed the news at a small scientific meeting after the company announcement, there was an audible gasp in the room. The leaders didn’t think regulators would permit this type of change. However, when she heard from the community that provided the feedback, Sawyer was reassured that they had made the right decision. Patients and physicians were so pleased to see that the company responded to their comments, and it completely transformed their attitude towards partnering with uniQure.

“Our goal was to deliver what they need,” says Sawyer. “They saw that.”

Now, uniQure has patients provide input into everything from their protocol to their patient materials and scientific steering committees. Again, and again, Sawyer has seen them contribute remarkable insights the MDs hadn’t thought about. She recalls one patient at a steering committee who pointed out an issue with the wording in a particular passage. It mentioned barrier protection during sexual contact, and he asked, “How are you defining sex? How inclusive are you being?” The team used his feedback to rewrite the section with more inclusiveness and clarity. 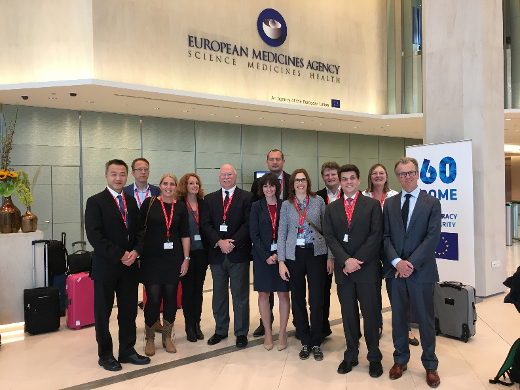 The uniQure team after defending the switch to AMT-061 at the European Medicine Agency. Sawyer is sixth from right.

“Sometimes, wearing the medical hat you forget to think about how it would play in the real world. What does it really mean for someone’s life?” she says.

Sawyer is making it her life’s work to focus on the patient—the most important stakeholder in drug development. She wants to help them take ownership over their care and make informed decisions. To do that, they need access to information—both directly and via access to educated health care providers. Her team presents scientific findings at patient meetings as well as medical meetings, and they engage with patient association leaders around science and policy. They even involve patients in economics and outcomes research. The goal is to foster true partnerships while developing each drug.

“At the end of the day, it’s about giving the patient control,” Sawyer says. “The best scenario is for a patient to have many options and be empowered to choose the best choice for them. The role of pharma in this setting is to equip them with the tools to make those decisions.”

Throughout her career, she has never lost the desire that drew her to pharma. It’s the desire to turn cool science into medicine and make something that matters—something that will make someone’s life better. For her, a great day is one where she has the chance to talk to a physician and hear a patient story. Learning about the tangible impacts that the science is making on patients is what keeps her coming back.

We had a chance to sit down with Eileen. Enjoy watching our interview to see how she responds to questions about:

This article is graciously contributed by Excellerate: Patient-Focused Engagement for Pharma.

This Powerpoint offers a comprehensive overview of Real World Evidence (RWE) and its evolving use in the biopharmaceutical industry.

MAPS explores Health Economics and Outcomes Research (HEOR): Why a Medical Affairs organization needs an HEOR function and how to build this capability.