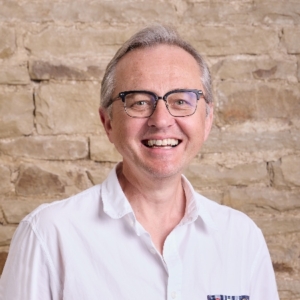 After returning to the UK after five years working as an outback doctor in Australia, David Williams had culture shock. Instead of diving back into practice, he joined Boehringer Ingelheim as a medical advisor, working through many roles to find the best fit. Twenty one years later, he’d been Real-World Evidence lead for Sanofi, held positions in China, and had worked in various regional/country Medical Director positions.

“I did my apprenticeship from the base, up,” David says.

Here MAPS speaks with David about the need for a new, personalized approach to engaging healthcare providers and other key opinion leaders, and how VISFO could help lead this effort.

MAPS: David, how in the world did you decide Medical Affairs professionals should be able to read minds?

David: At VISFO we’re very nerdy – like the Big Bang Theory but more so. With tongue in cheek and a British sense of humor, we had conversations in the office around, If you could have any superpower, what would it be? In Medical Affairs, we decided the answer was the ability to read minds. If you were an MSL and could go into an interaction with a KOL and be fully aware and up to date on their thinking in a specific area, would that allow you to ask better questions? How would that improve the conversation?  Discovering the why rather than just the what.

MAPS: And so you built this capability for mind reading?

David: We started as a group of friends with various skill bases: Market access, Medical Affairs, RWE, data science, software developers, app designers, and old war horses like me who have been around the industry. We’re 50 people now and over half of the team is in software, analytics, medical writing, neurolinguistic programming and machine learning. Basically, we’re a group of people who want to do things differently, and help companies lead in the new pharma world by drilling down to opinions on individual KOLs.

MAPS: And how does one drill down on KOL opinions?

David: In the past you’d have your knowledge, the company’s knowledge and what’s been published. What we’re finding now is a fourth pillar of knowledge: The digital space. We can use evidence based medicine  and look at every single digital mention across the globe from Instagram and TikTok, through to Twitter and websites, and then when I go into a KOL conversation, I’ve got on my phone what that individual KOL said 15 minutes ago on Twitter. Or you have relationships mapped between KOLs and you can see a closely-connected colleague posted something and you can ask your KOL what they think about their colleague’s study or opinion and ask how it relates to their own research. Now your conversation is much richer, rather than presenting and telling, conversations highlight potential actionable insights.

David: It is a huge amount, knowledge doubling every 12 hours is beyond any human. Take diabetes. The volume of scientific discussion is about 60 percent digital and 40 percent non-digital, if you are not aware of this invisible opinion, you are at a disadvantage.  In many therapy areas, the conversation is even more weighted to digital. What we’re finding is, for example, in 2019, there were 1200 publications on a certain rare disease, but 2.65 digital mentions. That’s the digital magnifier. And that’s where the mind reading stuff comes in. You can start seeing this invisible conversation, which is now becoming bigger and bigger.

MAPS: And do you see these enriched conversations bring value back to the organization?

MAPS: You talk about mind reading with KOLs, but it also seems like a major challenge for organizations is the mind reading required internally to know what dispersed and sometimes siloed teams within the organization are doing.

David: That’s the hive mind we’ve tried to bring in to make MSL teams more interconnected with themselves and to reduce the space between the head office and the MSL. If I’m in Boulder and someone’s in NYC and someone’s in Berkeley, we should be linked together. If you flag something and say, “I just spoke with this guy about leukemia and he said there’s a new study coming out showing x efficacy in a product.” If we’re simultaneously informed of that and know who’s publishing and it’s a guy in Berkeley, the MSL in Berkeley can reach out for a conversation now, as opposed to waiting six months for the study to come out.

David: The mind reading thing is us thinking differently but what we’re really trying to do is create real-time, responsive, listening conversations to gather actionable insights and then do something with them and not drop the ball. You know that active listener — someone you intuitively want to talk to rather than the salesman who wants to sell you a refrigerator or a car. That active listener is the person you want to have a conversation with again. It’s about the relevant conversation. If you’re equipped to have a relevant conversation that’s interesting and stimulating, people will talk, think, follow up and you can see the scientific landscape changing because of it.  The aspiration of this is to deliver actionable relevant insights, which shapes and changes future strategy and cements a robust ROI for medical affairs.

The Innovate article series highlights the ideas of Medical Affairs thought leaders from across the biopharmaceutical and MedTech industries. To submit your article for consideration, please contact MAPS Communications Director, Garth Sundem.